Earlier this month we released the ABM Metrics Report, an analysis of how B2B marketers view their account-based marketing efforts -- the challenges, plans, and metrics they use to measure success. Today, we’ll break down the survey data to see specifically how companies with more than 100 employees measure ABM.

Before we get into the challenges and metrics, let’s look at some of the firmographic data that respondents from these companies reported:

First, we will take a look at how much account-based marketing these companies are doing. As we know, ABM isn’t an all-or-nothing strategy for most organizations. We can see that according to this chart, every company with more than 100 employees, that is also doing ABM, is doing a combination of both ABM and demand generation marketing. In fact, five in six of these companies reported that ABM accounted for less than half of their total marketing efforts.

For larger companies, with presumably more ingrained strategies, it may take longer to adopt a new methodology. Today, many are still dipping their toes in the ABM water.

That being said, they see the promise of ABM. Nearly all of them said that they expect to be doing “a lot more” ABM in the next six months.

When asked to check all the ways they measure their ABM success, over 80% of these larger companies checked Opportunity Conversion, the most frequent of all the responses. But when asked which was their primary metric of success, half of them said that Engagement Metrics were their primary metric.

Marketing to accounts undoubtedly takes a long time. Over 90% of these companies reported marketing and sales cycles longer than two months, and about one-third said that their cycle was longer than four months. As many of these companies have only just started implementing an ABM strategy, they may be using engagement metrics to measure early success because they have yet to see a ton of new customers and new revenue.

As ABM develops and becomes an established marketing strategy at these organizations, we expect to see the primary metric shift down the funnel towards revenue generation.

Planning: Respondents made it clear that getting all of the relevant teams on the same page is the biggest challenge. Every single respondent from a company with more than 100 employees said that it was a challenge with ABM planning. The difficulties that come with aligning goals across teams and figuring out from which departments the necessary resources will come from certainly get amplified in larger companies.

Execution: Eighty percent said that personalizing the marketing outreach was a major execution challenge. This is consistent with the overall population, who also said that this was the biggest challenge with ABM execution.

Additionally, while the data suggests that they may have a harder time generating overall engagement, larger companies consider reaching senior-level positions less of a challenge, which may be due to having more resources and a more well-known brand.

Measurement: Respondents from larger companies were predominantly in agreement when asked to identify where they are struggling with ABM measurement. Three-quarters of this segment said that modeling the impact of touchpoints was the biggest measurement challenge.

Overall, the biggest challenge was getting relevant teams on the same page, the primary planning challenge. This comes with the “big company” territory. The bigger the company, the more bureaucratic and siloed each division becomes.

We also see that Measurement and Optimization never came up among respondents in this segment. This may have something to do with the fact that most of these companies are doing relatively little ABM at the moment. As ABM becomes a bigger priority, and a bigger percentage of marketing efforts and resources shift towards ABM, there will be a bigger focus on these later phases.

ABM represents different challenges and opportunities for every individual company, but it seems like there are clear challenges that face these medium to large sized companies. And even though more of these companies are only seeing moderate success with their current efforts, nearly all believe that if they continue to invest and work out these challenges, ABM will be a successful strategy.

So, if you work for a company that has over 100 employees, what’s the biggest way you can have an impact and make ABM a bit easier for your organization to implement ABM? 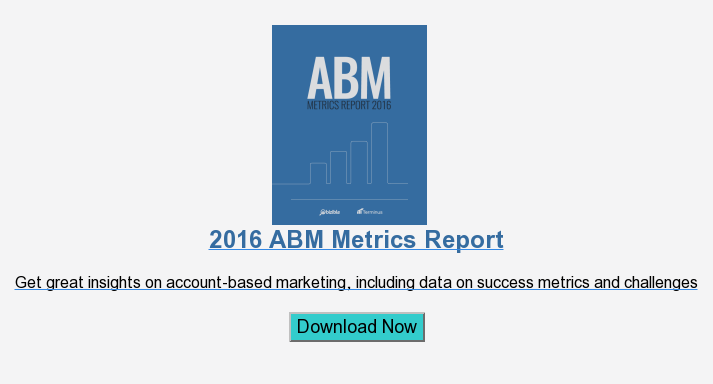