What Does Success Look Like On LinkedIn Ads? A Close Look At Our Best And Worst Performing LinkedIn Ads

LinkedIn Ads, while appealing in concept, has a lot of B2B marketers confused. Targeting an audience using professional criteria, such as job title or professional skills, while they are also in the right mindset (no cat videos on LinkedIn! Well, very few…) seems like a surefire bet.

But according to the LinkedIn Ads Benchmark Report 2016, marketers have yet to make up their mind about LinkedIn. Nearly half of marketers surveyed said that they are spending less than 10% of their marketing budget on LinkedIn and 37% are unsure if their current efforts are successful.

It’s still pretty early in the LinkedIn marketing game, and without clear examples of what success looks like, it can be hard to make definitive calls about your own performance.

We’re going to go through a bunch of our own ads -- our best and worst -- and analyze what made them successful or unsuccessful. We’ll walk through a variety of metrics, from the native front-end channel metrics that LinkedIn offers (e.g. clicks, CTR), to some deeper funnel metrics including revenue and ROI.

Overall, we're looking at these metrics to evaluate two things: 1) is the ad copy and image effective? And 2) is the content offer being targeted at the right audience?

An ad could have good copy and a good image, but if it's being shown to the wrong audience, it will underperform. On the flipside, if the copy and image are bad, but the audience is good, it will also underperform. You need to get both elements right, which usually means a lot of testing.

Here are three ads that got both elements right.

Compared to the performance of our other highly successful ads, this ad produced relatively low volume metrics across the board -- clicks, leads, and opps generated were all under average. But it also had a CPL significantly lower than our “target” number, which contributed to a relatively low spend for the amount of revenue that it generated. Of the three high performing ads that we’ll discuss, it had the highest ROI (about 3x).

Looking at the top-of-the-funnel metrics, this ad isn’t particularly impressive -- CTR is about average (0.4%), total leads generated is pretty low, and the lead-to-opp conversion (2%) is low, too. However, the opps that it did create had really high win rates, leading to a significant amount of revenue generated.

This ad, similarly, doesn’t have standout top-of-the-funnel metrics either. Its CTR (0.47%) is a little above average and the total leads generated hasn’t been particularly impressive. This has led to a CPL that’s actually slightly above our target.

What makes this ad successful however, is its lead-to-opp conversion rate (12.5%). Once prospects entered the funnel, they leaked at a much lower rate, which gave our sales team a lot to work with. In the end, it has resulted in an ROI of about 2x.

If we had based our budget allocation decisions strictly on the top-of-the-funnel metrics like CPL, this ad may have stopped running a while ago. But because we’re able to make decisions based on revenue and ROI, we were able to see that this ad was actually quite effective.

Finally, this is our top performing LinkedIn ad across a number of different metrics. It’s generated over 10x the number of clicks of our other top performing ads (which means we’ve also spent a lot), but it’s also had a CTR that’s about twice as high as average (0.88%).

Additionally, it has an 8.4% lead-to-opp conversion rate and a decent win rate. All-in-all, this has contributed to an ROI of 1.73x. While that ROI is not as high as some of the other ads, it has also generated 3-4x more revenue than our other top ads.

When analyzing performance, growth is a factor that can be as important as ROI. Ads that can scale with a positive ROI are tremendously valuable.

So these three ads were/are clearly very successful. But not every ad that we run is. As much as we wouldn’t like to admit, a few of our ads have bombed. The following ads generated zero revenue, but what makes these the worst are that the front-end metrics were decent, so we ran them for a little while.

After giving prospects a chance to go through the funnel, we were able to see that the prospects that these ads attracted didn’t convert down-funnel. They generated no revenue (therefore, zero ROI), which convinced us to eventually stop running them.

We’ll take a close look at their metrics to demonstrate why they were so bad.


Two Of Our Worst Performing Ads

You’ll notice that this “bad” ad is actually offering the same content as one of our top performing ads. So what makes one and the other bad? It could be the ad copy -- the more successful ad clearly shows how pipeline marketing is pitted against lead generation. But I’d argue that it’s likely the audience targeting.

What you can’t see by just looking at the ads is who they’re being shown to. This one was shown to a more general B2B marketing audience, while the other was shown to a much more specific audience. While general audience targeting may score high in top-level metrics, like number of clicks and even leads generated, they aren’t going to be as effective down-funnel.

For example, the cost per click (CPC) of this ad was about a dollar cheaper than the higher performing ad. However, as we move down funnel, the numbers turned out to be extremely poor. The click-to-lead ratio was 2.5x worse than the other ad which translated to a CPL twice as high as our target. The opp conversion rate was also significantly lower, and, in the end, it didn’t generate any revenue.

You could write brilliantly clever ad copy and pair it with an eye-catching image (not saying it’s true for this ad), but if you show it to the wrong audience, you won’t see any results that matter.

This ad similarly had promising front-end metrics. It attracted a lot of clicks at a click-through rate that we’re happy with. Even the click-to-lead ratio was decent, which led to a CPL that was within an acceptable range. However, once those leads converted into opportunities, we found out that the accounts were really low grades.

Ultimately, the prospects that this ad engaged didn’t convert and generated zero revenue.

When it comes down to it, you don’t want to judge the success of your ads based on the information that LinkedIn gives you. Instead, you need to use down-funnel metrics.

If we had based our decisions to keep running or stop ads based on the front-end metrics, like clicks, CTR, or even CPL, we would have been tricked into pouring money into ads that weren’t attracting the right people and generating revenue.

Yes, it’s inevitable that some of your ads won’t work. You may even have to keep spending money on poor performing ads while you wait for prospects to move through the funnel. But once you have enough down-funnel data, you need to make decisions based on revenue and ROI. That’s the only way to measure true success. 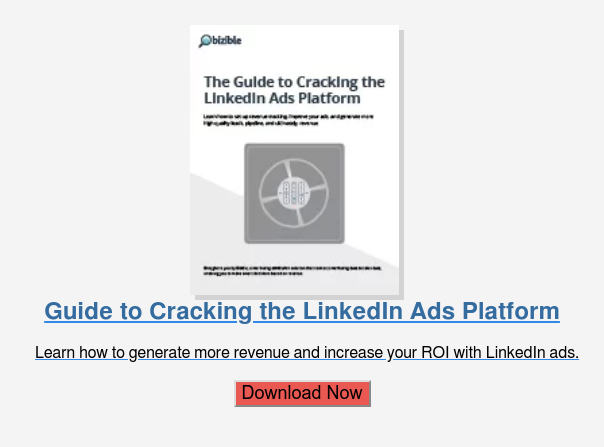