Why Annual Planning In B2B Marketing Is Seriously Flawed, And How To Fix It

A revenue plan is a set of revenue targets with an accompanying plan to reach them. High quality data, forecasting techniques, and large Excel spreadsheets are the typical tools marketing leaders use to build a revenue plan. Unfortunately there is a flaw in the typical forecasting process.

The Flaw Of Averages

One of the fundamental elements of a typical revenue plan is the conversion rate used to estimate growth. In order to decide how much to spend and where to spend it, we must rely on a single, average conversion rate for each channel. For example:

So to create a revenue plan you coordinate revenue targets, say $100,000 in MRR, and the use your conversion rate to understand how much you must invest.

But there's a pitfall in using an average conversion rate for revenue and annual planning.

The Rule Of Large Numbers In Marketing Budgets

Why does it matter? When considering a high volume of leads, large deal sizes, or a combination of both, a small percentage difference in estimated conversion rate produces a large magnitude change in the forecasted revenue number. Simply, if you’re forecasting for a target of $1B, a conversion rate being off by a small percentage amount changes the revenue forecast by a large dollar amount. The result is a drastically different estimate in required marketing budget.

If using conversion rates is flawed and conversion likelihood is misunderstood, the number of leads marketing needs to source starts to look suspicious. The plan is built on uncertainty and when marketing goes to execute they may not invest the right amount of money and resources to hit goals.

Adopting An Alternate Approach To Revenue And Annual Planning

Rather than think about average conversion rates for each stage, marketing leaders can adopt a simpler view of the funnel, a view that more accurately reflects the reality that every lead has it’s own probability of converting and that each of these probabilities are taken into account for a more accurate forecast of opportunities and revenue.

The funnel no longer needs to be a rough estimate of revenue based on average conversion rates across many stages. The funnel can be thought of as a tracking system that automatically updates the probabilities of leads converting to opportunities and opportunities converting into deals/revenue. So two stages instead of three, four, or five. Using multiple stages is still important for managers and channel owners to optimize, but for a high level view, a simpler view of the funnel is better for planning.

This adds accuracy to revenue forecasts for a number of reasons.

Weighted Touchpoints Based On Recency

Utilizing average conversion rates means predictions farther out in the future are more likely to be off by a large margin compared to utilizing individual predictions for each lead and opportunity.

For example, models can recognize that less weight should be given to old touchpoints compared to more recent touchpoints.

Weighted Touchpoints Based On Type

Forecast models ingest touchpoint data to understand how influential certain touchpoint types are. For example if engagement with sales collateral is shown to be associated with higher conversion rates then the model will increase the weight given these touchpoints over other types of touchpoints, and in turn create a better prediction.

In sum, moving past average conversion rates allows you to take advantage of the certainty that some number of touchpoints, and some combination of touchpoints, are associated with higher conversion rates. Utilizing algorithmic models will allow you to get a clearer understanding of where to spend to hit goals because your revenue targets are based on conversion probability and not a simple average.

Luckily all the hard work of understanding these probabilities and building the models can be done without hiring a team of analysts and data scientists. At Bizible we created Revenue Planner to address the flaw of average conversion rates.

We want to change how leaders do  marketing performance management and planning. To learn more, read the guide below. 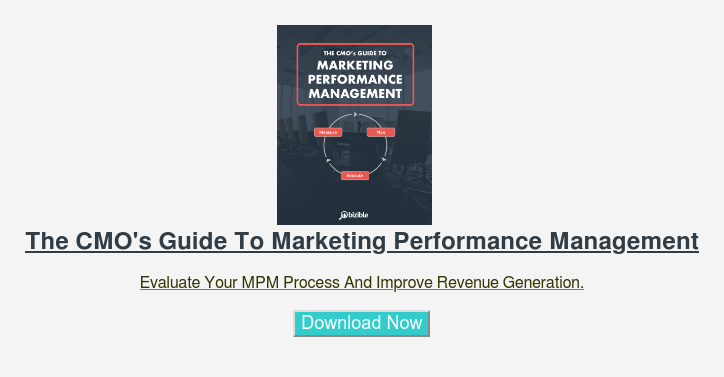